Home Business Business review: A look back at top picks in 12 months

KARACHI:  If 2018 was shrouded in uncertainty, 2019 brought much-needed clarity. Major developments on the economic front, vital policy approvals and improving macro indicators played a key role in shaping Pakistan’s economy. The Express Tribune takes a look at some of the key events.

Qatar lifted ban on import of Pakistani rice: In 2011-12, the Middle Eastern country had banned import of Pakistan’s rice mainly due to the substandard and low quality supplied by exporters. However, following PM Imran’s visit to Doha, the Qatari government agreed to lift the ban.

Saudi crown prince visits Pakistan: In his first visit to Pakistan, he signed investment agreements worth $20b.

Restriction on purchase of cars by non-filers lifted: The Finance Supplementary (Second Amendment) Bill 2019 completely withdrew the restriction and allowed non-filers to buy new vehicles of any engine capacity.

Also Read: With no ease of doing business, industry remains a loser

No offshore hydrocarbon reserves found near Karachi: After drilling over 5,000 metres, foreign companies Eni and ExxonMobil failed to discover any reserves off the seashore.

Rupee weakened to historic low of 164.05 against the dollar: The free fall of the rupee came since the government ended its control of the exchange rate under the IMF condition and let market forces – mostly banks – determine the rupee-dollar exchange rate.

Pakistan, IMF struck $6b deal: In May, the govt inked a loan deal with the International Monetary Fund for a period of 3 years. The first loan tranche was received on Jul 10, the second was approved on Dec 20.

Gold hit historic high at Rs90,000 per tola: Bullion price soared to its highest-ever level in Pakistan after the precious metal touched a six-year high in the world market.

Pakistan slipped three notches on competitiveness index: It ranked 110th on the Global Competitiveness Index of the World Economic Forum due to deterioration on seven out of 12 pillars.

Pakistan climbed 28 places on EODB Index: Ranking improved from 136 to 108 on the World Bank’s Ease of Doing Business Index and it secured a place among the top 10 reformers.

Pakistan settled 39-year-old trade dispute with Russia: Pakistan became the first country to settle all dues of Moscow dating back to the Soviet-era, clearing way for Russian investment of over $8b in the country.

Moody’s upgraded Pakistan’s rating outlook: The ratings agency upgraded Islamabad’s outlook to ‘stable’ from ‘negative’ on expectations that the balance of payments dynamics would improve, supported by policy adjustments and currency flexibility. 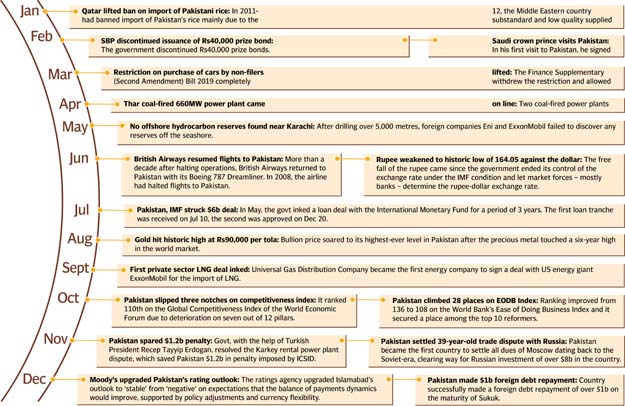 Rs40,000 prize bond to be discontinued

World Bank team to arrive in Pakistan to assess impact of...